Our first born just turned 5 a few days ago. I can still remember bringing her home from the hospital and marveling at how amazing it was to finally have her home and begin our life together as a complete family.  For those of you who are unaware of her story let me share with you now:
David and I started out as any newly married couple wanting a family. However after 4 years of trying to conceive we were pretty sure that something was wrong and the possibility of never having a child was very real and hurtful. We did not have the means to get ourselves tested or even try for IVF (In vitro fertilization).

When we first moved to Puerto Rico in 2004 we hadn’t been here for more than a couple weeks when news came that David’s dad was going in on a Friday to have angioplasty but was immediately rushed into surgery for a quadruple bypass surgery. Since we had just moved 3,000 miles across the ocean we were pretty tapped out for money. We could only wait by the phone and pray. News came Saturday morning that David’s dad had sat up during surgery and lost more than 30% of his blood but the surgery was over and successful. We called our friends back home and our supporting churches to pray. Sunday morning when David’s mother went in to see her husband, he was sitting up in his hospital bed eating breakfast and asked where she had been! We went to church that day still worried but prayerful. A Deaf friend of ours named Tony was there and he could see that David was worried but David did not take the time to explain everything that had happened, he simply said, “My dad is sick”. Tony went home that night and prayed and asked God to show him what was wrong. God did show him in a dream and that next Sunday morning Tony shared with David all that God had showed him. God had showed him about the surgery and his recovery, he said that his dad was having problems eating and recovering but because David had honored God He would smooth all of his dad’s recovery problems away and he would live a long and healthy life. We did not know about his recovery problems because David’s parents hadn’t told us because they didn’t want us worrying. His dad started eating normally that same day. We praised and glorified God over healing his father and the miraculous recovery.

It was about 2 months later that Tony came to us again and told us that he had had a dream about us. He said God had showed him a picture of David and me with a baby girl that had blond curly hair, brown eyes, her name was Hannah and for the first 3 months we wouldn’t tell anyone we were pregnant. Tony knows Spanish, not English but he spelled “Hannah” in English not Spanish.  We were very excited to hear this news but we didn’t know when this would happen. In February 2007 we went on furlough and returned back to PR in May. We normally gain quite a few pounds from our traveling and staying with other people so when David started losing and I maintained my thick waist he began to wonder if I was pregnant. I was skeptical simply because over the years of trying to have a baby and buying EPT tests I was frustrated and didn’t want to get my hopes up. We bought a test and it was inconclusive. We bought another digital one and the result came instantly but I waited the full 3 minutes to tell David because I didn’t know if it would “change its mind”! It was positive and we didn’t wait to tell anyone we just started calling everyone. So much for waiting 3 months. or so we thought.

By the time we got in to see an OBGYN and to see the ultrasound the doctor told us we were 5 1/2 months pregnant! David nearly passed out and fell over! We told her all that Tony had told us and she said we were having a girl. On the delivery day all the nurses knew about Hannah's story and how we had been waiting for her.  When Hannah was finally delivered the nurses and our doctor all said, “Wow she does have blond hair the story was true!”  As Tony had said we wouldn’t tell anyone we were pregnant for the first 3 months because we didn’t know we were pregnant. We were overjoyed and amazed at this unexpected blessing that we thought might never possibly have come true. Hannah means “The Lord hears”, the Lord heard our prayers and even gave us a messenger to bring us peace while we waited!

Hannah has traveled to the States 5 times and went to Kenya twice. She can remember what the Amsterdam, Holland International airport looks like and where the “Jungle Gym” is located in the airport. She has a passport with about 5 pages filled with stamps and visas. We have taken her into third world countries and she has built snowmen with her grandparents in Ohio. In each circumstance and in each environment she has adapted and “gone with the flow”. To her if mommy and daddy are there when she goes to bed at night, she feels comfortable and at peace. We are so blessed to have an exceptionally graceful child! 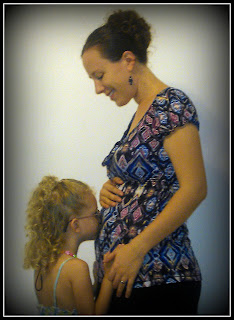 Now we have a second blessing on the way! Hannah can’t wait to be a big sister and is practicing taking care of a baby on her dolls. She talks all the time about how she will care for her baby brother and about all the things he will need.  She asks almost daily if the baby is “big enough to come out”.  Hannah likes to tell everyone that “mommy has a baby in her belly”!

We know that the Lord has a special plan for Hannah and for Jacob even though he is still being formed by our Master. We pray for the grace and wisdom as we lead these 2 blessings as we raise them up with this verse in mind:

So that you, your children and their children after them may fear the LORD your God as long as you live by keeping all his decrees and commands that I give you, and so that you may enjoy long life. Deuteronomy 6:2

We are excited to see where the Lord will take them and what He has planned for them.What a truly awesome God we serve. We are not sure what tomorrow might bring that we know whatever may come the Lord is already preparing the way.

Posted by Heather Ingram at 10:29 AM No comments: